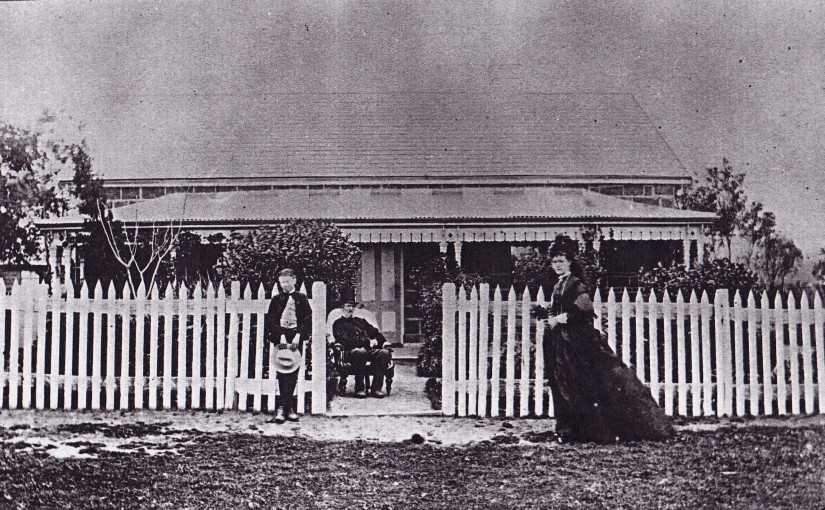 William Patrick Fanning and his daughter Johanna outside his house "Sunnyside" in Bulla & Tommy a ward of the state.

I am not sure when this photo was taken, outside “Sunnyside” Bulla, but I suspect it may have been when “Big Bill” was sick, as he is sitting down. He died of cancer of the jaw in 1876. In 1863 a tender was advertised by the architect Mr J F Mathews in The Argus for construction of the verandah so it is after this time.

William Patrick Fanning, known as “Big Bill” because he was a very tall man, was born in Thurles, Co Tipperary, Ireland in 1812. His parents were Edmond Fanning and Johanna (Judith) Darmody.

He was the third son of a family of 10 children. The Fannings were quite numerous and well known in Northern Tipperary and many were farmers while some went into business, quite a few were publicans, spirit sellers and shopkeepers. This pattern continued in Victoria with two of his daughters, Mary and Johanna, being hotelkeepers. By Irish standards they were well off and this is reflected in Big Bill’s business initiative and land acquisitions here in Victoria.

His surname is inconsistent being spelt as Fannin in 1841, Fanning in 1862,  Fannan in 1869 (in an advertisement in the Argus, for a neighbour’s property, he is referred to as Mr Fannan). In 1862 he signed as Fannan but his two children, Mary and John, signed their surname as Fanning. This may be to do with the fact that he could not write and would have been using phonetic spelling. In those days people may not have been as particular about how they spelt their names.

Unfortunately, not much is known about Catherine Hayes. From her death certificate we can establish that she was born c1818 in Co Tipperary Ireland and that her father was a farmer. I remember being told that she smoked a pipe when she lived in Victoria.

She married William Patrick Fanning in 1841 in Cork presumably just before they sailed on the “Enmore” on the 22nd of June. They left from Cobh,  in Co Cork on june 22 1841 and arrived three months later at Port Phillip Victoria on Oct 4 1841. Catherine is listed as Mary Fannin, age 24, farm servant, who can neither read or write. Both were Roman Catholics and came as assisted passengers, their fares being 19 pounds each.

Below is the “Enmore” passenger list page where Catherine and William Fanning are listed as William and Mary Fannin. The full passenger list for the Enmore and more on immigration at this time are in the post  Australia The “Enmore” Cork Ireland to Port Phillip Victoria 1841. Descriptions of Melbourne as William and Catherine would have found it  in 1841 are in the post Life in Melbourne Victoria 1841-1852.

The post “Ireland in 1841” gives the political and social background in Ireland and the preceding years and makes it easier to understand why they decided to leave their home and families and come to Australia.

I have wondered why they chose to come all the way to Australia and not go to America or Canada. I have read that immigration to Australia became more attractive as it was aid provided through the bounty system. Fares were paid.

The colonial bounty system came into being in 1837 but was revised in 1840. It granted money to people bringing into NSW from the UK (including Ireland) agricultural laborers, shepherds, tradesman, female domestics and farm servants. There was plenty of work as there was a shortages in these areas.

Kikenny, Tipperary, East Limerick, East Clare and North Cork accounted for over half of all Irish assisted emigrants to Australia. It also seems that life was better for immigrants in NSW and that they did not end up in urban ghettoes like so many did in America.

One of Big Bills relations, Martin Eviston had been transported to NSW in 1830 for manslaughter. He came back to Ireland sometime after 1839 and married Johanna Fanning Big Bill’s cousin. While he came back all his children ended up emigrating as well as quite a few of their cousins (children of Thomas Eviston and Mary Fanning) and settling in Australia. The Evistons lived at Clonomocogue close to the Fanning families and Big Bill would no doubt have talked to Martin Eviston. While Martin Evaston came back to Ireland he must have painted a very positive picture of life and opportunities in the colonies for most of his children and their cousins to have emigrated.

When Catherine and William first arrived they spent some time working at the wharves before they moved to Wyndham in Werribee.

They had five children: John Henry, Mary Elizabeth, Catherine, Johanna Louisa and Edward Francis. The two eldest John and Mary were born in Werribee in 1842 and 1844 while the others were born at Bulla.

In 1844 William Fanning purchased 150 acres of land in what was called “Tullarmarine Island” the area south of the Sunbury Road enclosed by Jackson’s Creek and Deep Creek on Loemans Road near Bulla Bulla where he raised his family. It would have been purchased from the Colony of NSW as Victoria did not exist as a separate colony until 1853.

“The current project study area is located on land that was theTullamarine pastoral run (Spreadborough and Anderson, Settled District map). Some of the early landholders of pastoral runs located between Jacksons Creek and Deep Creek included W.J.T. Clark, W. Fanning and M. Loeman (Symonds 1985, 213). In 1844 William Fanning purchased 150 acres of land on what was known as “Tullamarine Island”, which is the area south of
Sunbury Road, enclosed by Jacksons Creek and Deep Creek on Loemans Road (Symonds 1985, 41). Here he set up his farm, which his wife looked after while Fanning undertook contract carting to the goldfields during the 1850s. The Fanning’s built their Sunnyside homestead during the 1850s at the village of Bulla Bulla (Symonds 1985, 41-42). Bulla Bulla was surveyed in 1847, and by 1853, Bulla Bulla consisted of 12 wooden houses, the Deep Creek Inn and Tulip Wright’s hotel, with the first post office opening within this hotel in 1850, then moving to another building (Symonds 1985, 49). During the 1850s, traffic to and from the goldfields passed through the Bulla region, causing some problems with the steep sloping roads. During this time several businesses commenced at Bulla Bulla, including a kaolin clay works used to manufacture porcelain, as well as a large flour mill and brickworks (Symonds 1985, 50). In 1854, Bulla Bulla became known as Bulla. By 1870, the population of Bulla was approximately 200 people, with 2630 in the Bulla district, and 263 dwellings in an area of 73,500 acres (Symonds 1985, 51). By the 1880s, Bulla contained four hotels, a hunt club, several churches and a grocery store and wine saloon. In the 1860s, the State Government introduced the New Industry Act that gave special assistance to enterprising people to develop virgin land (Symonds 1985, 117). Early settlers to the Bulla area, such as W. J.T Clark took advantage of this assistance and started to grow grapes.” From the Outer Metropolitan Link to Melbourne Airport and Bulla Bypass Assessment Report 8/8/2011

According to “Victoria and Riverina 1931-32” Aboriginal people were numerous at this time but “owing to his tactful handling the family never had the slightest trouble with them.”

On the discovery of gold at Sandhurst (Bendigo) in 1851 Bill started contract carting to the goldfields. It is thought they would have used bullock teams as the tracks were extremely rough. Broken axles were common. The first day took them to Monegeeta.  While William “Big Bill” took supplies across to the gold fields in the 1850’s, Catherine looked after the 100 acre dairy farm. It took three months to do the round trip by waggon. Bill did five trips a year at 100 pounds a ton. The first day got them to Monegeeta.

After the village of Bulla Bulla was surveyed in 1847, he was the first to purchase land in Quartz Street just behind Tulip Wright’s Deep Creek Inn.

This is where he had “Sunnyside” built. The original homestead on Loemans Rd was a slab hut built under the shade of a large gum tree some 60 meters from the present home, and this was followed by a separate kitchen, later used as a storeroom. “Sunnyside” a single storey bluestone slate roofed farmhouse with outbuildings was built in 1859 using only local stone and gum trees, with the chimney built of hand made bricks. The outbuildings include a simple bluestone kitchen, bluestone woolshed (originally used as stable and coach house), a piggery and a shed with roughly split timber side walls and weatherboard gables. The piggery dates from 1853, the cow shed from 1855 and the shearing shed from 1860. Originally Loemans Rd used to run directly in front of the “Sunnyside” picket fence but this was later resurveyed to the present line. ” The house was registered as a historic building in 1992. It has stayed in the Fanning family.

On the 7th of July 1855 William purchased 342 acres along Wildwood Rd, called “Emu Flat”. This was left to his son John Henry. He also owned land at Kilmore and in Melbourne where the present day Windsor Hotel is situated in Spring St.

Some time after he and Catherine emigrated a group of 17 relatives came out to Victoria. We are not sure of their names or the dates or their exact relationship to Big Bill. I have been told it was about ten years after Bill came out. He apparently wasn’t all that happy to have them staying at Bulla and let them stay in the cattle sheds before letting them stay on his land at Spring St for three months. Some are then said to have gone up to Queensland and some to NSW.  All attempts to discover who they were and what happened to them have been unsuccessful.

The Argus of August 2, 1856 published a list of names of those petitioning W.J.T.Clarke esq., to nominate to run to become a member of the Legislative Council. W. Fanning is listed on this as are other Bulla residents including Martin Batey, David Patullo and Richard Brodie. Clarke also called “Big Bill” owned huge amounts of land in the Sunbury area and was elected to the Legislative Council in 1856. His son built the mansion “Rupertswood” in Sunbury.

In 1858 William Fannan had land in the Parish of Kerrie gazetted. It was 107 acres 2 rods and 38 perches in size. This land was at Monegeetta and was either given to his daughter Mary or sold to her and her husband Jeremiah Skehan.

William Patrick Fanning is listed as William Fannin, farmer, in this 1856 Census for West Bourke in the colony of Victoria. He has a farm on 100 acres freehold at Bulla.

In 1862 the body of an infant girl was found in a sack in Emu Creek. William found the sack which was close to the living quarters of a Johanna Doyle. She was arrested but later acquited. At the inquest William, his wife Catherine and son John and daughter Catherine were all questioned. William signed his name as Fannan.

When William arrivd in 1841 he could read but not write according to the passenger log. His signature may well have been the only thing he could write. Being a farmer he would have had little time to learn to write. His son and daughter both signed as Fanning in 1862 at the same inquest. Fannan is the phonetic way of spelling Fanning.

William Patrick Fanning died in 1876, age 65, after a long and painful illness, cancer of the jaw.

William Patrick Fanning, “Big Bill”, is buried in the Catholic section of the Melbourne General Cemetery in Carlton, with his wife, Catherine, daughter-in-law, Bridget Fanning nee Collins, and his grandson, Thomas. In the Argus he was described as a much respected old colonist of 35 years whose passing was much regretted.

Catherine died on the 20th May 1895 aged 77 and is buried in the Melbourne Cemetery.

Below are detailed genealogy reports on the ancestors and descendants of William Patrick Fanning 1812-1876.