Peter McSweeney came out to Australia in Oct 1838 from Co Cork Ireland with his wife Hannah Meehan. He was a cooper and lived in Emerald Hill Melbourne. His son John Vincent married Sarah Ann O’Regan. Their only daughter Annie is my ggrandmother. She married Robert Eason Cook and had three children by him. He died in 1906. Her second marriage was to Rupert Owen Croxton Collier. They had five children. Rupert died in 1916 and Annie in 1919. They are buried in Springvale Cemetery Melbourne. 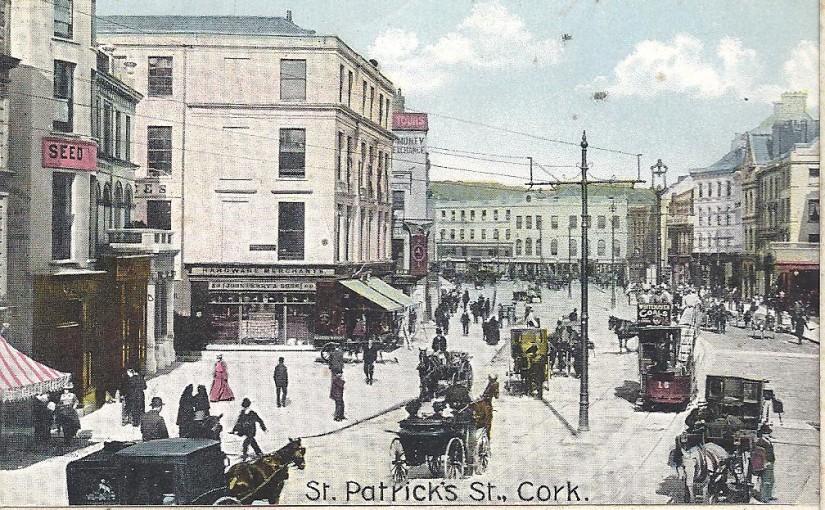 Peter McSweeney was the first of this family to come out to Australia. He was born in Co Cork Ireland about 1801 and came to NSW in 1838. He was a cooper. His father Michael McSweeney was also described as a master cooper on Peter’s death certificate. The surname was often written as Sweeny and occasionally Swiney.

I have been looking at DNA matches to McSweeney. One family who must be related in some way to Peter McSweeney came from Ballytrasna in Kilmurry RC Parish (1901 & 1911 Census Kilmurry). Ballytrasna is on the main road from Cork City to Macroom town. There is a great similarity in first names but I haven’t been able to find a baptism record for Peter. As his father was Michael McSweeney and a master cooper the connection to Ballytrasna is further back. I am however sure there is a common Ballytrasna McSweeney ancestor. In the Griffiths Valuation map below Bryan McSweeney is leasing about 85 acres on lot 3.

I have also a DNA match with three male members of the Tobin family from West Cork. We match the same segment on the same chromosome along with a Mary Kelly. I have read this can indicate a common ancestor. In the Tobin family there is  Swiney ancestry. Margaret Swiney married John Dineen.

The above card is from the records of The Latter Day Saints. Through Ancestry.com I found the passenger lists for the “Calcutta” and some of the information is different. Hannah’s maiden name has always been given as Meehan and I suspect Newboldt is a transcription error. Below are the ship’s list entries for Peter and Hannah McSweeney.

The Calcutta’s passengers were all highly skilled bounty immigrants, their fare being 15 pounds each. Their occupations ranged from blacksmiths, plasterers, carpenters to one farmer. There were no laborers on this ship. Peter McSweeney was a cooper.

“Traditionally, a cooper is someone who makes wooden staved vessels of a conical form, of greater length than breadth, bound together with hoops and possessing flat ends or heads. Examples of a cooper’s work include but are not limited to casks, barrels, buckets, tubs, butter churns, hogsheads, firkins, tierces, rundlets, puncheons, pipes, tuns, butts, pins and breakers.

Traditionally there were four divisions in the cooper’s craft. The “dry” or “slack” cooper made containers that would be used to ship dry goods such as cereals, nails, tobacco, fruits and vegetables. The “dry-tight” cooper made casks designed to keep dry goods in and moisture out. Gunpowder and flour casks are examples of a “drytight” cooper’s work. The “white cooper” made straight staved containers like washtubs, buckets and butter churns, that would hold water and other liquids, but did not allow shipping of the liquids. Usually there was no bending of wood involved in white cooperage. The “wet” or “tight” cooper made casks for long- term storage and transportation of liquids that could even be under pressure, as with beer.”  Wikipedia

He owned some property and in his will he is described as a gentleman. His estate was valued at 788 pounds. He owned land in Bridport St Emerald Hill and also two two storey houses of six rooms each. He also owned land in Gold St Collingwood and a four room cottage 17 Albert Rd Emerald Hill.

Peter McSweeney died on 7 Mar 1872, aged 70. He resided at 17 Albert Rd. South Melbourne and is buried in Melbourne Cemetery.

In his will Peter McSweeney left his two houses in Bridport St South Melbourne to his daughter Hannah.

His wife Hannah died the same year shortly after her husband.

In Hannah’s will five living children are mentioned, Mary married to Frederick Pearce from San Francisco, James, Catherine, John and Hannah. So it appears that Eugene is deceased by 1872 and perhaps Micheal James is being called James. Money is given to John Vincent, Mary and Hannah. Michael James, Catherine and Eugene are not included.

Their son John Vincent McSweeney married my gggrandmother Sarah Ann O’Regan on June 4 1871 at St Peters and Pauls Catholic Church in Emerald Hill. She was 19 and John 21 and a teacher.

Sarah McSweeney nee O’Regan died of breast cancer in 1895 she was 43 years old. She is buried in Melbourne Cemetery with other O’Regan family members.

There is much more on the O’Regan family in O’Regan Family History from Limerick to Emerald Hill Melbourne.

They had one child Ann Teresa in 1872 in Camperdown Victoria in the Western District between Geelong and Warnambool. She was often called Hannah although she later called herself Annie.

I have not been able to find John Vincent McSweeney on any electoral rolls. Below is a timeline for him:

June 1871 marries Sarah O’Regan. He is 20 and a school teacher and resides in Emerald Hill.

21 August 1888 In his father-in-laws will Sarah his wife is living at Blessington St St Kilda and he is described as from Sydney NSW.

1895 Wife Sarah dies at 101 Union St Prahran where his daughter and her husband are living. On her death certificate Sarah is listed as living 2 years in Qld, 2 years in NSW and 39 years in Victoria.

1908 Daughter Annie marries for the second time, to Rupert Collier. Her father’s occupation was listed as civil engineer.

April 1919 His Annie daughter dies. His occupation was listed as civil engineer.

It seems that he spent some time in Qld and NSW but I can find no trace of him in electoral rolls, newspapers or teacher’s records. Strange that he wasn’t registered to vote.

Their daughter Annie McSweeney married Robert Eason Cook in Armadale in Melbourne on 24 Jan 1893. He was 19 and a law clerk and Annie was 20. Annie is my great grandmother on my mother’s side.

The Scottish ancestry of the Cook family is covered in another post Easson Family History.

Their marriage broke down at some stage and Annie married Rupert Owen Croxton Collier. (What I have on the Collier family is in another post still in draft, Collier Family History.) She had a child to Rupert Collier while still married to Robert Cook.

Robert Eason Cook died suddenly at age 34 in Brisbane Queensland. What he was doing there is unknown. His occupation was given as indent clerk. The informant on his death certificate was his brother Thomas Cook who usually resided in Perth Western Australia. What they were both doing in Brisbane at this time is a mystery.

I can remember being told that my great grandparents died in the Spanish Flu Epidemic 1918-1919 after the Second World War in which about 12,500 Australians died. Rupert Collier died in 1916 of broncho pneumonia aged 36 and Annie died in April 1919 age 43 from influenza, her youngest child was 4 years old.

Annie is buried in Springvale cemetery Melbourne with her second husband Rupert Collier.