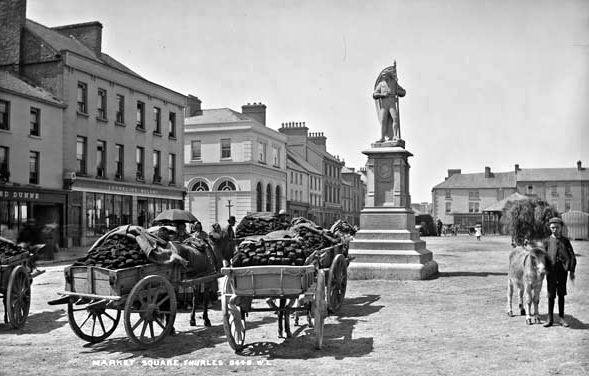 These Fannings from Thurles are on the Ellis Island records

Bridget Fanning, from Thurles (spelt Tharles), arrived May 10 1900 on the “Oceanic”. Listed as labourer. Her final destination was New York where she had a brother living at 403 E.185th St. She had been in America before, looks like, 18 mths ago. She was 25 and single.

Katie Fanning, arrived 22 Sept 1909, age 26, a servant and single on the “Caronia” which departed from Queenstown Ireland. She had a brother living at 446 West 27th St New York. Her father was James Fanning of Ballycahill, Thurles. With her were three cousins:

William Bannon age 25. His father is listed as John Bannon of Ballycahill, Thurles. His mother was Mary Fanning from Clondoty, Loughmore.

Michael Fanning of Thurles, aged 33, arrived on the “Majestic” on Oct 3 1901. He had a brother Martin Fanning living at 4645 South Halisles?? St Chicago. He had been in America before in 1893 for 9 mths. Listed as a farmer. Departed from Queenstown, Ireland.

On the 1901 Census for Co Tipperary there is a Michael Fanning listed at Coolcroo in Two-Mile-Borris aged 33.

Laurence F. Fanning, aged 30, from Thurles arrived on the “Teutonic” on 25 May 1905. He was a US Citizen, occupation clerk. His final destination was 4659 State St Chicago and reason for journey was “returning home”. Port of departure was Queenstown, Ireland. The story goes that Laurence Fanning eloped to America after or to marry his first cousin Bridget Fanning of Clondoty. He worked in a bar there and when he returned to Tipperary he had a pub in The Ragg, Bouladuff.

Helena Fanning from Borisoleigh, age 26 and single arrived on Oct 25 1921.

Mary Fanning from Borisoleigh, 23 and single arrived on Dec11 1910 on the “Coronia”.

I have included these last two women from Borissoleigh, Co Tipperary, as there was a Fanning family in Victoria who came from Borisoleigh. They lived at Penshurst, near Hamilton, and most likely still have Fanning descendants there. Borrisoleigh is not that far away from Thurles and there were quite a few Fannings living there although I have not made any direct connections with them yet.