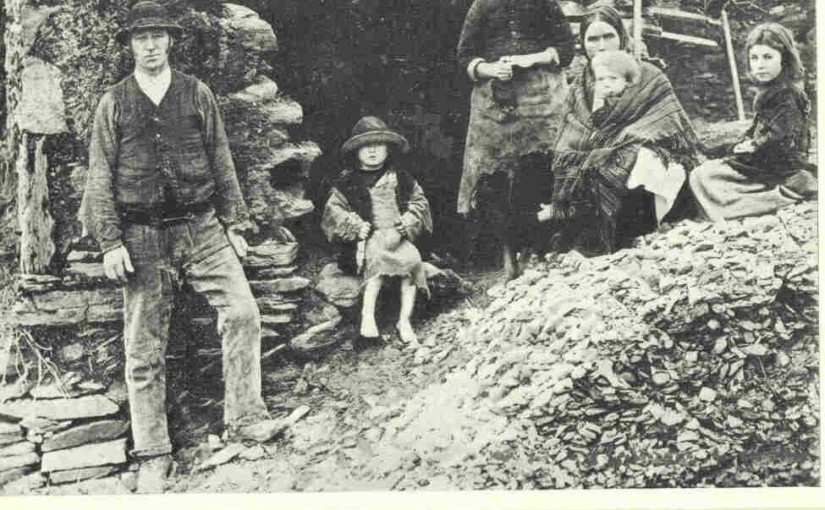 Rate Relief of the Poor

“At the beginning of the Nineteenth Century in Ireland poverty was widespread. The population had more than doubled in the course of a century and had reached six and a half million. It is estimated that over two million were nearly destitute and at starvation level.

The problem was not one that could be ignored any longer by the British Government. Examination of the situation in Committee lead to a variety of remedies including public works projects, emigration and the introduction of a system of Poor Law. However the growing influx of Irish emigrants to Britain was a matter of increasing concern.

In September 1833, yet another Royal Commission was established. It was chaired by Dr. R Whately, the Protestant Archbishop of Dublin. In the following year the Poor Law Amendment Act was passed which introduced a new system of poor relief to England and Wales. The Workhouse was to be the only method of relief for the poor. At the time it was considered unsuitable for Ireland where the able-bodied were more than willing to accept any work that came their way.

Lord, John Russell the Secretary of State for the Home Department felt that the Commission had overstepped their brief. He decided to send George Nicholls one of the English Poor Law Commissioners to Ireland to investigate the situation. He was to assess whether a system based on Poor Relief, funded by a local poor rate would be effective. He was also to find out whether a workhouse system could be established. Nicholls travelled throughout Ireland. He failed to acknowledge that the needs of Ireland were substantially different to those of England. He recommended that Ireland adopt the English Workhouse System.

His recommendations were influential because in 1837 a bill, The Poor Law Act Ireland 1838,  was introduced in Parliament. The Irish Poor Relief System was to be financed by a local poor rate. It met with opposition from landlords who were perturbed about the expense of the poor rate. Tenants criticised the bill also because they were in dread of confinement to a workhouse. However, in spite of its critics the bill became law, and in July 1838 the “Act for the Effectual Relief of the Destitute Poor in Ireland” was passed.

The Poor Law Commissioners for England and Wales were to have control of the implementation of this act for Ireland. George Nicholls was appointed Commissioner and he was assisted by four assistant commissioners based in Belfast, Dublin, Cork and Limerick. The country was to be divided into Poor Law Unions based on the Irish electoral divisions. The electoral divisions were made up of townlands. Each Union was obliged to provide a workhouse for their destitute poor. A Board of Guardians was elected in each union to administer the Poor Law.  A compulsory rate was levied in each union to finance their system. The granting of relief was at the discretion of the Poor Law Guardians. Priority was given to the aged and infirm, children and people resident within the Union concerned. Boards of Guardians were elected annually on the 25th March, and only cess payers could vote. Later in the nineteenth century the Poor Law developed to encompass services such as outdoor relief, medical services for the poor, assisted migration and other social services.” From Askaboutireland

The above records are from  County Tipperary Ireland Genealogy.