Thomas A Dwyer was born in 1899 in Co Tipperary Ireland. His mother was Catherine Fanning of Lissaroon and his father was Michael Dwyer. He was a member of the IRA and was murdered in Bouladuff, called The Ragg, on 29 March 1920. He is buried in Drom Cemetery Co Tipperary. 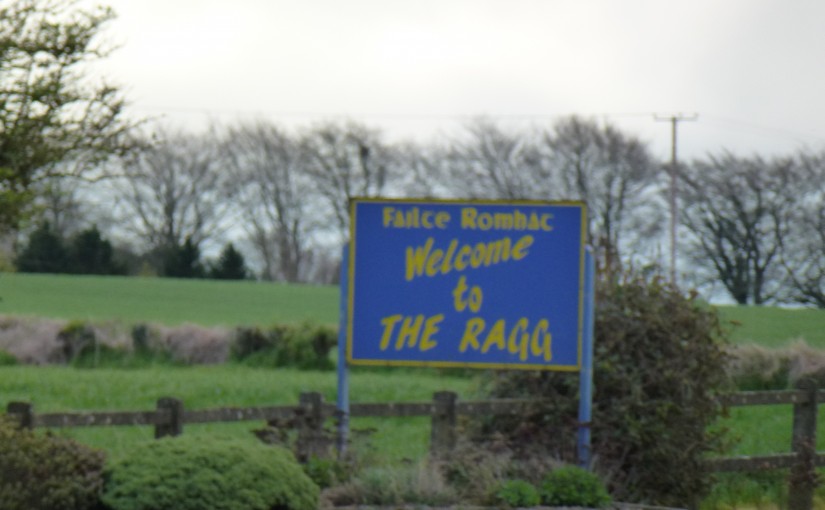 Thomas Dwyer, aged 21 years, of Bouladuff Co Tipperary Ireland was shot dead by members of the R.I.C., the Black & Tans, on the morning of  March 29 1920.  His mother was Catherine Fanning of Lissaroon.

I was told by a relation that the family was so shattered by his murder that it was not spoken of for 40 years.

Bouladuff, also known as Inch and The Ragg is a village 5 miles outside of Thurles and 3 miles from Borrisoleigh.

In March of 1920 Constable Heany was shot in The Ragg and later died. 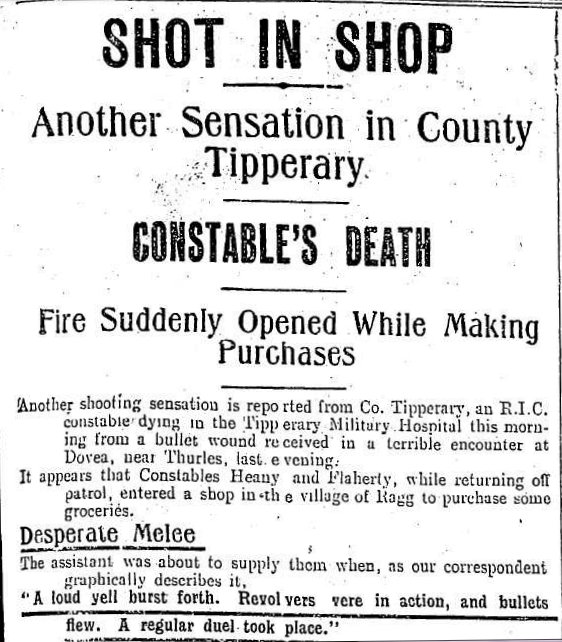 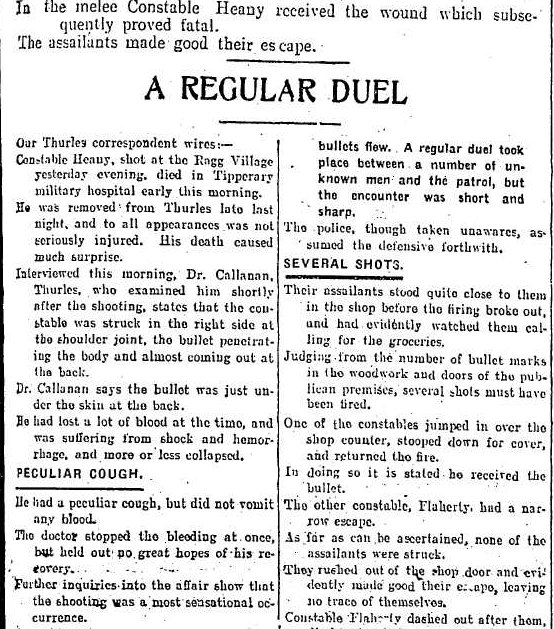 “Our Thurles Correspondent telegraphed as follows last night- Bouladuff, a quiet little village four miles from Thurles, commonly known as The Ragg, was the scene of a terrible murder last night. The trouble started about 3.30. A group of men stood in the village street, when suddenly shots rang out, and the police charged and dispersed the people.

For some hours afterwards all was quiet.

At 12.30 five men knocked at the house of Thomas Dwyer, part of whose premises consist of a shop. Dwyer’s sister, Mrs Delaney, heard the knocking, and got up and asked-“Who is there?” “Friends” was the reply. “Is Tom inside?”. She suspected something was afoot, and told them through the keyhole that Tom was not in. They replied that they knew that he was, and that they would break in the door if it was not opened quickly.

Mrs Delaney, when interviewed to-day, said that she was terribly frightened. Her brother was in bed but a short time, having remained outside as he had a presentiment that he would be shot. He told them earlier the day that he feared that his end was near. She went to his room and told him about the men at the door. Returning to the door which the men were kicking, she had just turned the key when the five men burst in. Mrs Delaney screamed at their appearance. They wore false beards and masks, and they carried rifles. Brushing her roughly into the kitchen, one man covered her with a rifle, while the other four passed towards the room where her brother Thomas lay. The doomed man appeared at the door wearing his pants, with a lighted candle in his hand. The men appeared to know their man quite well, for the moment they got a glimpse of him they fired.

Dwyer fell mortally wounded, pierced by two bullets, one of which smashed the candlestick in two. While he lay on the ground one of the assassins said “Has he enough?” and another replied “Give him another,” so another shot was fired into the body. Dwyer gave a moan, and the murderers made off, first asking Mrs Delaney “Is there anybody else to be shot here.” They slammed the door, and while they were on the roadway outside the house they fired several shots apparently at random.

The screams of Mrs Delaney aroused the neighbours, who ran for a priest and a doctor. Father Hayes arrived in time to administer the last rites of the Church. Dr Power, Borrisoleigh, also came, and did all that he could, but Dwyer expired an hour after the shooting. Two men were seen running from the back of Dwyer’s house across the fields after the murder.”

An inquest was held and here is part of what was written in The Irish Times on March 31, 1920:

“The town of Thurles was quiet today, but evidence of recent disturbances were apparent in the shattered windows of a number of shops, and in the display of shutters as tokens of mourning for the young man, Thomas Dwyer, who met his death under such mysterious circumstances at Bouladuff……..The Ragg is a village containing not more than a dozen houses, three of which are licensed. It will be recalled that the hamlet came under public notice some weeks ago through the murder of a policeman named Heanue there on the 4th March. It was stated in evidence at the inquest on Constable Heanue that the men who fired the shots were absolute strangers to the locality. Bouladuff is on the main road between Thurles and Borrisoleigh, three miles from the latter town. The nearest police station to the village is Dovea, about a mile distant. Dwyer was a young man, about 21 years of age, and is described as having been industrious in his habits, and popular in the locality. The only other occupants of the house at the time that he was shot by the raiders were his widowed sister, Mrs Delaney, and her little daughter, and an invalid uncle………There are about 100 additional police on duty in Thurles to-night, those in the streets carrying carbines.”

“Business was entirely suspended in the town of Thurles and the surrounding towns and villages today. All the shops in Thurles were closed, including the licensed houses, and a quiet, if anything, even more pronounced than that of the Sabbath prevailed. The suspension of business was intended as a demonstration of sympathy with the family of Thomas Dwyer, the young man who was shot dead at Bouladuff in the small hours of Monday morning last.

The funeral took place from the Roman Catholic Church at Inch, close to Bouladuff, at noon to-day. From an early hour a long string of vehicular and pedestrian traffic was proceeding along the six miles of highway between Thurles and Inch. Every single available vehicle in Thurles was pressed into service for the occasion. The direction of traffic, and of the day’s proceedings generally seemed to be in the hands of the Sein Fein Volunteers. Many of these Volunteers were in uniform, and wore belts and bandoliers, and haversacks. Squads of men in military formation marched along the road to Inch, and crowds of Volunteers were across the roadway at the approaches to Bouladuff. There was not a single policeman to be seen in the village or in its vicinity. At least two thousand Volunteers from all parts of North Tipperary and from further afield were concentrated at the scene. The number of vehicles, which came to participate in the funeral procession-traps, side-cars, and soforth-approached, if did not exceed, a thousand.

Shortly after noon the funeral procession started from Inch Church on its way to the cemetery at Drom, six miles away. Rain fell heavily for the most part of the journey. The procession was headed by a single company of the Irish Volunteers, most of them in uniform. On either side of the hearse marched a singlr file of Volunteers, while behind the hearse came three mourning coaches containing the chief mourners. There then marched a number of Irish Volunteer contingents, Sinn Fein Clubs, representativesof the Transport Workers’ Union, a party of young women of the Cumana na uBan, and a contingent of demobilised soldiers form the Thurles district. None of the Volunteers marching in the procession displayed any arms.

On its way to the cemetery the procession passed Dovea Police Barrack, but no demonstration of any kind was made. The doors of the barrack were closed, and the police remained inside while the cortege was passing. When the procession was about half-way on the road between Inch and Drom a Volunteer cyclist rode up to the leaders with the intelligence that a large party of military and police had occupied the Drom Cemeterty and its immediate vicinity. The leaders, however, decided to proceed on their way, and no alteration was made in the order of the procession. It appears that about an hour before the procession was due to arrive at Drom several military lorries drew up outside the cemetery. At the time a contingent of Volunteers was standing in the roadway apparently for the purpose of regulating the traffic when the funeral arrived. There were about one hundred soldiers and policemen, the former belonging to the Northampton Regiment, and the latter being in charge of District Inspector Wilson, Nenagh. The soldiers carried full military equipment, and the police were armed with carbines. This party entered the cemetery and took up various positions in parts of it, the military falling into line along the wall of the graveyard, and a party of police standing a short distance from the open grave. No incidents of an untoward nature occurred, and, though evidences of excitement were visible among the crowd, the impression commonly prevailed that the presence of the soldiers and police was for the purpose of preventing the firing of a volley over the grave, as had been done at the funeral of Mr. McCarthy on Monday last. No volley was fired, though it was subsequently stated that when, at the termination of the religious ceremony at the  graveside, the military and the police had returned to Templemore, a party of Volunteers fired a volley over the grave. The prayers at the graveside were recited by Rev. Father Finn, and a Volunteer bugler sounded the “Last Post”. An officer of the Irish Volunteers delivered an oration at the graveside.  After the funeral the crowd quietly dispersed.” 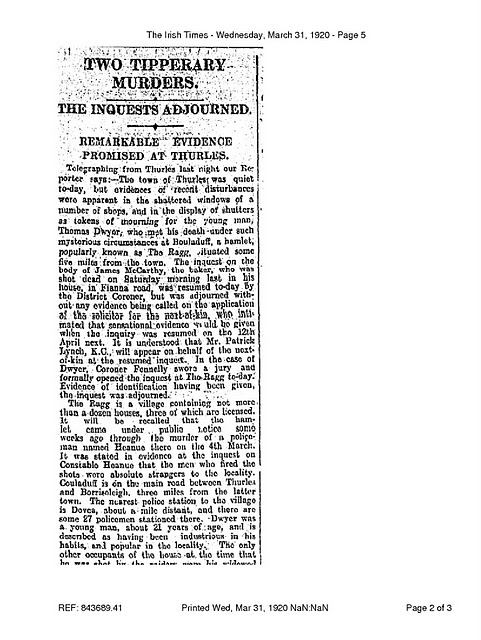 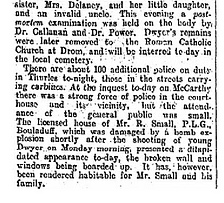 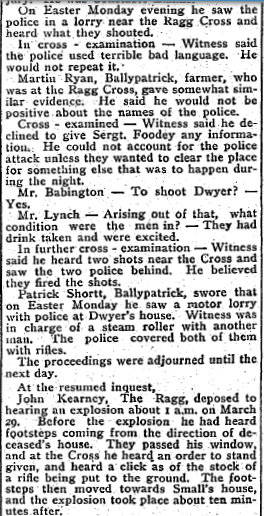 The Ragg, Thurles, was the scene of another outbreak by police on Saturday.

Four huge motor lorries filled with armed police left Thurles on Saturday at 6 p.m., cheering and discharging shots as they passed through the streets. They started from the police barrack, having it is stated come from Limerick on transfer back to Belfast via Dublin. They continued discharging shots as they dashed along, passing Killinan cemetery and Ballinashow. Arriving at Bouladuff, known as The Ragg, the four lorries halted at Dwyer’s public house, into which they rushed, brushed the attendant aside, and getting behind the counter each man helped himself to as much drink as he pleased. A quantity was consumed on the premises, and a great deal more was transferred to the lorries and not paid for.

When this had been done the party returned to the house, knocked all remaining bottles off the shelves with their rifles and then fired volley after volley for a considerable time through the ceiling.

After making the place a complete scene of wreckage they proceeded on their journey cheering. The only persons present at the time were an invalid man and his niece, Mrs Delaney, sister of the late Thomas Dwyer, the victim of The Ragg tragedy. The house has been repeatedly fired into since the shooting of Thomas Dwyer, and his sisters were so terrified as to leave the house derelict for some time, until they received an assurance from the authorities that they would receive no further molestation. 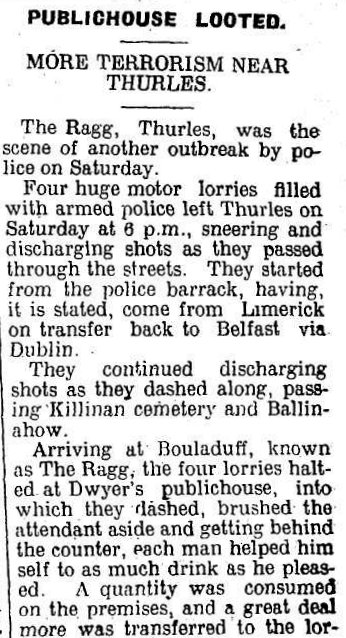 In the recently released witness accounts in the Bureau of Military History James Leahy of Nenagh, an active IRA member, describes what was happening with the Black and Tans and Police in and around Thurles in 1920. Leahy recounts the murder of Tom Dwyer and the events that followed. 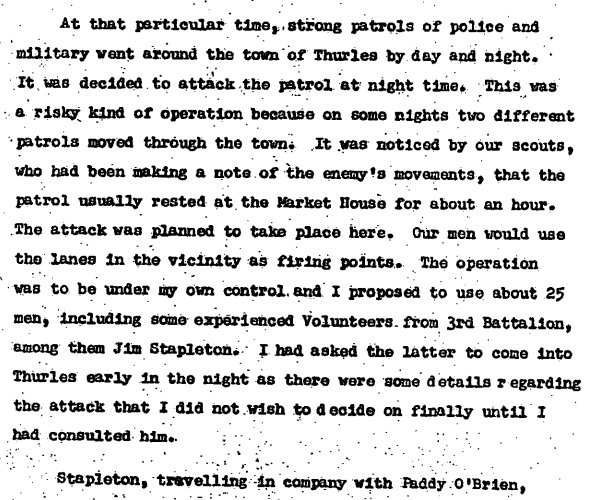 Kathleen Dwyer (Mary Cath Dwyer) 1893-1952 was present the night of Thomas Dwyer’s murder. She was married to Mathew Joseph Delaney. He died in 1919. In 1921 Kathleen, as she was known as, married Denis Bannon. She and Denis ran the Post Office/Pub at Bouladuff. 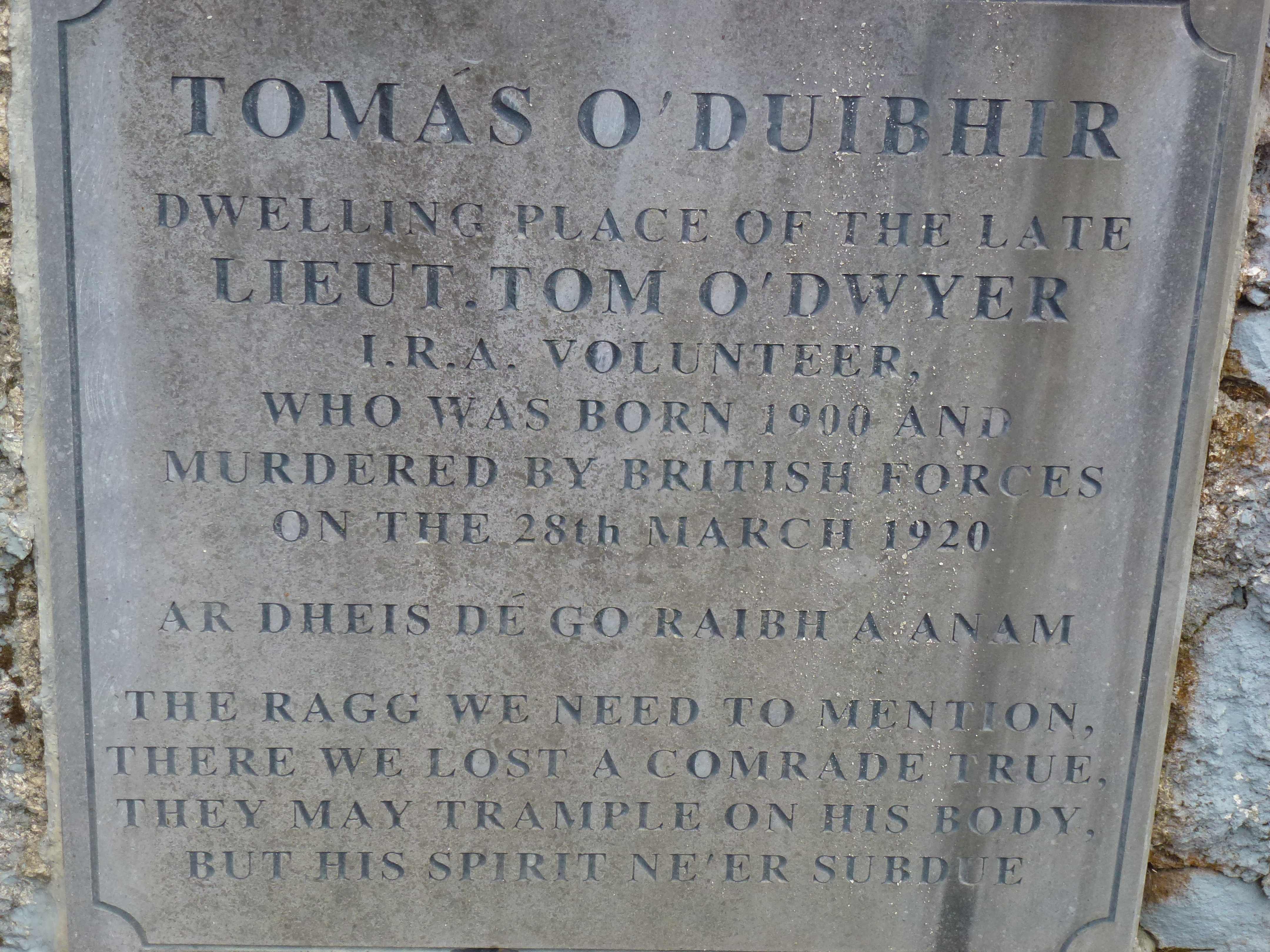 There is also a bridge on the Mall River in Templemore Co Tipperary that has been named after Lieutenant Thomas O’Dwyer.