John Thomas Fanning (1878-1957) was the son of Ellen Gormley and John Henry Fanning. He was born in Bulla Victoria, lived for some time in NSW and was a soldier in WWI. He married Annie Tapscott and had two sons. He died in Coburg Victoria Australia. 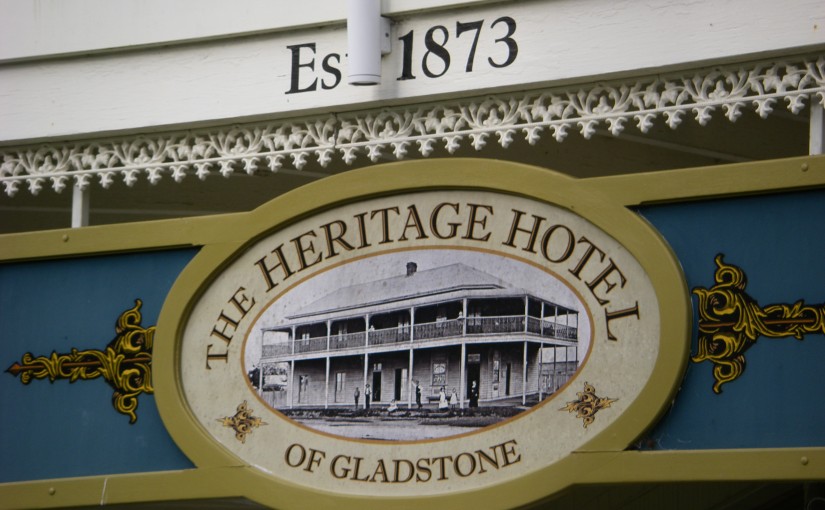 John Thomas Fanning was the third son of Ellen Gormley and John Henry Fanning. He was born at Bulla in Victoria in 1878.

He was also the father of the famous Melbourne full forward, Fred Fanning and I have been told that John Thomas was himself a very talented boxer and althlete who held various sporting records.

Before he enlisted in 1916 he was living and farming at Belmore River NSW on land owned by his uncle Peter Gormley. John Thomas was reported in The Macleay Argus, 24 June 1910, as having donated money, five shillings, to the Dr Casement Memorial Fund for the Belmore River area. His mother Ellen Fanning was left this land and she eventually sold it in 1926. Before he enlisted John Thomas Fanning held an auction of his goods. 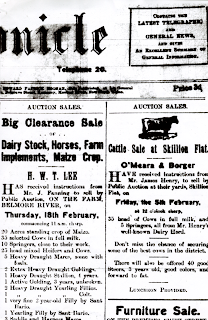 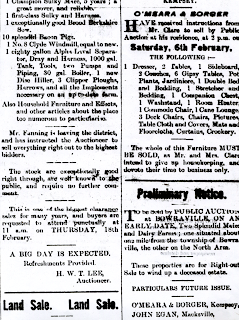 Published in the Macleay Chronicle Feb 3 1915.

Belmore River is where the relations of John Thomas Fanning were living. John Thomas’ mother was Ellen Gormley. His grandfather was Cornelias “Connor” Gormley. The Gormley family grave is in Frederickton Cemetery, near Kempsey, NSW. Belmore River is near the village of Gladstone and is a very beautiful lush farming area near the coast. Even today there are probably only about 30 farms/houses along the river.

John Thomas Fanning was a 38 year old farmer and single when he enlisted in Sydney on the 30th October, 1916. His address was given as Bulla, Victoria and his next of kin, his mother Ellen Fanning, of the same address.

His unit was called The March 1917 Reinforcements and embarked from Sydney on the “Marathon” on May 10, 1917. John Thomas was a driver. He returned to Australia on the 23rd of March, 1919.

After the war he returned and married Annie Tapscott and had two children. One of these, Frederick, was the famous Melbourne footballer, Fred Fanning. He did not return to NSW and lived the remainder of his life in Coburg Melbourne and worked as a rubber worker.

He died in Heidelberg in 1957 and is buried in a military grave in Bulla Cemetery.

The following detailed genealogy reports trace the ancestry of John Thomas Fanning back to William Fannin of Lissaroon Co Tipperary Ireland and also his descendants in Victoria Australia.