John Henry Fanning was born in Victoria Australia in 1842, son of William Patrick Fanning and Catherine Hayes, and died in Melbourne in 1894. He married Ellen Gormley and had sixteen children with her. He was a farmer and lived at Emu Flat in Bulla Victoria. he is buried in Bulla Cemetery. 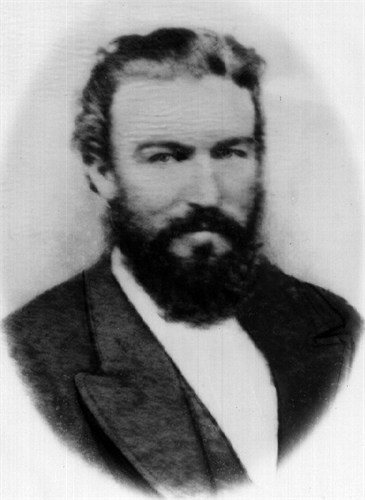 John Henry Fanning was the eldest son of “Big Bill” Fanning and Catherine Hayes. He was born in 1842 in Werribee, Victoria, Australia.

One story about him is that he took off and went up north to Queensland and was breaking in horses there. He was supposed to have been cut off by his father for doing this. He is also supposed to have eloped with the station manager or owner’s daughter.

He married Ellen Gormley in Sydney, in Nov 1870, at St Patrick’s Church. Ellen was the third third daughter and youngest child of Cornelius and Anne Gormley.

He married the daughter of Connor Gormley, a farmer in NSW. This may well have been where he was breaking horses. It looks that they may have eloped as they were married in Sydney which is a long way from either of their family homes. Although Ellen did get the permission of her father to marry as she was under the age of 18, although the above record has her age as 21? It also has her place of residence as Sydney.

Ellen’s parents were Cornelias (Connor) Gormley and Ann McDermid  and Ellen was born in Ogulary (Townland or Parish of Ogulla) Co Roscommon, Ireland about 1851. Cornelius was the son of Thomas Gormley. She and her family came out to Australia on the “Ellenborough” arriving on 12th October, 1853. On board were her father, listed as Connor Gormley, a shepherd, aged 43, her mother, Ann aged 35, her sister Sarah, aged 11, her sister, Eliza aged 6 and Ellen aged 2. Her brothers, Thomas aged 13 and Peter aged 9, were also on board.

Her family lived near Kempsey in New South Wales at Belmore River, where they farmed. Her parents and brother and sister are buried in Frederickton Cemetery, just north of Kempsey.

John Henry Fanning was also not left the Family property which is customary as he was the eldest son. Was this because of his wild ways? or did he get the best deal anyway? “Emu Flat”, 342 acres purchased by his father on July 7 1855, was larger and  supposedly a better property. John Henry’s branch of the family became known as the “Flat Fannings” as opposed to the “Hill Fannings” up on a hill at Bulla.

John Henry Fanning from Bulla is listed as signing the Petition for Clemency for Ned Kelly in 1880.

John Henry Fanning died aged 52, in 1894 in St Kilda, Melbourne of a liver ulcer which he was sick with for six months. He was supposed to have died after being trodden on by a cow.

When he died in 1894 at age 52,  his youngest was one year old. Ellen Fanning leased Emu Flat and moved to Essendon. The property was sold about thirty years later and had become very run down.

John Fanning died without a will and his probate papers are online at PROV. His land of 346 acres was mortgaged and the remaining balance of his estate was 793 pounds.

On his land was a four roomed stone house. It is hard to imagine 18 people living in a four roomed house. Ellen came to live at 35 Keilor Rd Essendon with her children.

John Henry Fanning is buried in Bulla Cemetery with his wife Ellen Gormley and many of his seventeen children.

John Thomas Fanning, son of Ellen and John Henry Fanning and grandson of Cornelius and Ann Gormley, also lived at Belmore River before he enlisted in 1916. He is listed in the Sands Directory 1858-1933 at Gladstone in the years 1910-1914. In 1914 he had 14 horses and 65 cattle on 149 acres. Gladstone is a village in the Belmore River area. He farmed land owned by his uncle Peter Gormley. After Peter Gormley’s death  in 1916 Ellen Fanning was left this land . She sold it in 1924.

Ellen Fanning died 21 May 1928, aged 76 years. In this grave is buried a John Fanning who was buried on 26 Nov 1925.There is no death record for him or details on the cemetery records other than his name and burial date.

These graves are in the Bulla Cemetry, Victoria, Australia. A number of their children are also buried in the cemetery at Bulla:

The following reports trace the ancestry of John Henry Fanning back to Co Tipperary Ireland and also describe his descendants in Victoria Australia.