Edward Francis Fanning was born in 1850 to William Patrick Fanning and Catherine Hayes from Thurles, Co Tipperary, Ireland. He inherited “Sunnyside” and was a farmer. He married Bridget Anna Collins in 1884 and had children by her before she died in childbirth. His second wife was her sister, Sarah Collins, who also died young. She had five children. Edward’s surviving children were William Patrick, Edward Francis, John Hugh, Francis Collins and Thomas Fanning. Edward, called Ned, died in 1927 at Bulla and is buried in Melbourne Cemetery. 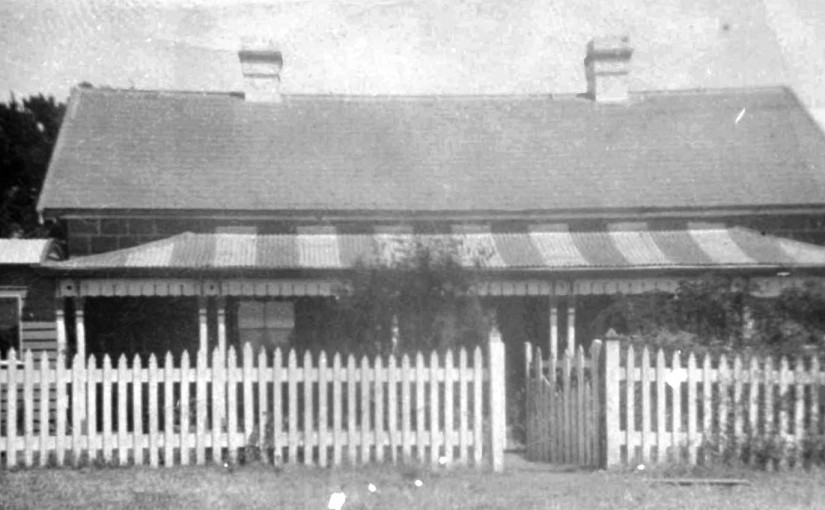 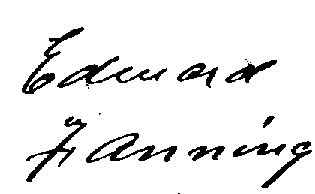 Edward ( known as Ned) was the youngest son of William and Catherine Fanning who emigrated to Victoria in 1841. He was born  on the 15th of Feb, 1850, at Bulla.

Ned attended the denominational school at Bulla and took over the farm after his father’s death and remained there until his death in 1927 at the age of 79.

He was a member of the Royal Agricultural Society, a founding member of the Victorian National Party, and accompanied the Burke and Wills expedition when they passed through Bulla. He is my great grandfather. My great grandmother was his second wife, Sarah Collins.

He married his first wife Bridget Anna Collins on Jan 2, 1884, at Bridget’s parents’ home in Northcote. 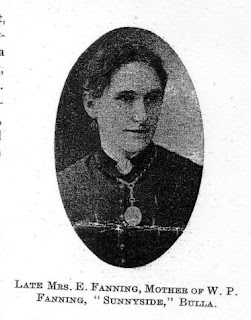 Bridget Anna Collins (pictured left) was the eldest daughter of Patrick Collins and Mary Gribben. She was born in Footscray, Melbourne in 1860. Her family home was in Waterloo St Northcote, Melbourne.

Her father, born in Co Limerick Ireland, was a Police Constable. His wife Mary came from Co Down in Northern Ireland. Pat Collins came out to the colonies sometime between 1853 and 1856 and worked on the gold fields before becoming a police constable in Melbourne. His wife, Mary, arrived from Ireland in 1857. Bridget Collins was born at Footscray in Melbourne, Victoria, in 1860. She had four older brothers and seven sisters.

Bridget married Edward Francis Fanning, the youngest child of William Patrick Fanning, “Big Bill” and Catherine Hayes, in 1884, at her parents’ home in Northcote, Melbourne, Victoria. She was twenty four and Edward was thirty four years old when they married.

Bridget had three children: William Patrick born in 1885 at Bulla, Edward Francis born in 1887 at Northcote and Thomas Augustus who died, at Deep Creek, after three days, in 1888. Bridget died in childbirth on July 2 1888, after giving birth to Thomas. She was twenty seven old and had been married less than four years. Edward was left with two young sons, one three years old and the other two years old, to look after. Bridget and her infant son, Thomas, are buried in the Melbourne Cemetery.

Family stories have it that after Bridget died Edward needed help with his young children and Sarah Collins came to live there and help out. Apparently she fell pregnant to Edward and a huge rift came between the two families over this out of wedlock pregnancy. This explains the Collins family looking after the eldest two boys but not the children of Sarah and Edward. One of the boys complained that Edward kept the half brothers separated from each other.

Sarah was only 27 when she died of  tuberculosis (called phthisis in those days), in 1897. She had been sick for two years. Below is the memorial card for Sarah Fanning.

Their son, Thomas, also died of the same disease in 1915, at age 20. He died in a sanitarium in Surrey Hills, Melbourne, after being ill for four years with tuberculosis (sometimes referred to as consumption).

Apparently there was talk of Edward marrying another Collins sister, Tottie (Mary Josephine Collins) but this did not eventuate.

Edward was a farmer and lived his whole life at “Sunnyside” in Bulla.Edward was elected to the Board of Advice for the Bulla District in 1878 and re-elected in July 1881.This was reported in the Argus on June 18, 1878: The above photo of Bulla residents was taken in 1921. Edward Fanning is the sixth person from the right standing, directly behind the seated woman in black.

Ned Fanning died in 1927 and is buried in the Melbourne General Cemetery in Carlton with his parents, William and Catherine and  Sarah and Bridget, his two wives and his infant son Thomas Augustus. His death was mentioned in The Argus: