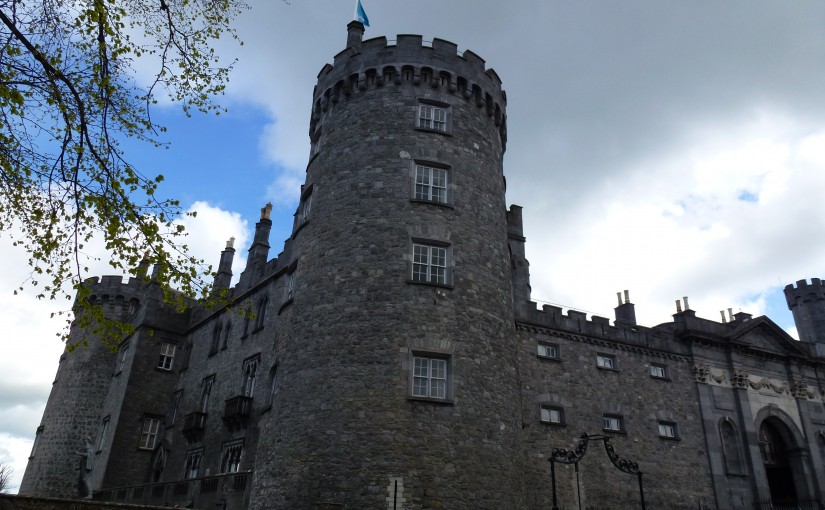 Richard Fanyn (Janyn) was among the first of the family in Ireland. He was a witness to Geoffrey FitzRobert’s charter to Duiske in 1204 [Duiske charters, no. I.] As Richard Fannynge he witnessed the charter of William Marshal I to Kilkenny between 1207 and 1211 [Chart. Priv., p.34 ; Liber Primus Kilk., p.74]. He was killed fighting on the side of Richard, Earl Marshal, in 1234 [Cal. Doc. Ire., i. 2212]. Richard may have been the original enfeoffee at Clomantagh, barony of Crannagh, Co. Kilkenny, as suggested by the descent of the 1/2 knight’s fee there.

Richard Fanyn was succeeded by his son Thomas, who held half the fee of a knight at Glothementhau according to the 1247 feodary (see notes below). In the record he is given as Thomas, son of Richard Janyn (Fanyn). Glothementhau is likely the equivalent of Clomantagh, for in 1300 John Fanyn was lord of Clomantagh. In that year, after an inquest held at Kilkenny, which found that John held the manor of Clomantagh of the Earl of Gloucester, in chief, and had then nothing in the manor except one messuage worth yearly 16d., license was given to him to grant to the parson of Clomantagh and his successors in perpetual alms a messuage in Clomantagh, next the church, late of Master Henry Fanyn [Cal. Just. Rolls, i. 336].

Clomantagh is noted in later times to be held by the Butlers.

The 1317 feodary (share of Hugh le Despenser and Alianora his wife) was taken from “Chancery Miscellanea“, P.R.O., London (File 9/24). Variants of this records (possibly of a later date) are from the British Museum, Additional Manuscripts MS. 4791.

Between 1261-1266 – Sir William Fanyn was among the (prominent) witnesses where Ralph, Prior of St. Edmund of Athasell and the convent there, quit-claims to Theobald, Butler of Ireland, all houses with all building and closes which John de Hakeford, farmer of their church held in said vill, near the water. [Vol I, p.59]

November, 1284 – Bond of Ralph son of Adam de Caston, Nesta formerly wife of Geoffrey de Norton, Richard son of Meyler, Robert de Preston, William Devenys and Maurice son of Richard Seweyn to their lord, Theobald le Botiller, that John son and heir of said Geoffrey de Norton would grant to said Theobald all security which he should have in seventeen acres in the tenement of Baligaveran (Gowran) which formerly belonged to Symon Dyme; two acres in le Berton, and an acre of meadow in le Hamme; and the whole meadow that Sir Theobald have to the said Geoffrey at le Norhe Korrach (? north Korrack) and in four acres formerly belonging to Walter Fanyn; and five acres that said Walter formerly bought to Walter Fox lying near the gate called Quenaldtsbarre, … [Vol I, p.108]

August 23, 1305 – Know ye all present and to come that I, Eustace le Poer, knight, have given and granted to William ffanyng the manor of Moyobyra, with all its appurtenances, namely the castle, messuages, lands, meadows, etc., turbaries, homeages, services, suits of court and all else, named and to be named belonging to the said manor. To have and to hold to the said William and his heirs in heredity forever; paying yearly therefor to me and my heirs for the first twenty four years from the making of this charter fifty marks of silver, and after this term, is completed the said William and his heirs shall be forever free of the above said rent for the said manor, saving however to me and my heirs all other services of the said manor, viz. ten shillings of royal service when proclaimed, all law suits of the tenants of the said manor at my court of Carth (? Carch), and all wardships, marriages, and reliefs of the heirs male of the said William when they happen. Given at Kilkenny. Witnesses: John fitz Thomas, Peter son of James de Bermyngham, Walter Lenfaunt, Geoffrey de Poher, knights, Edmund le Gras, Hugh de Antone (? Dandon or Dundon) and Robert de Lond’ (? Londres). [Vol I, p.156]

September 14, 1343 – John, son of William Uske, grants to Milo Cornewaleys, chaplain, two carucates of land in Cradokeston, together with common pasture belonging to the same for all farm beasts of said Milo grazing there; which carucates lie between the land of Thomas Fanyn and the land formerly Thomas Aunteyn’s in length and breadth from the land of Edmund Gras and that of Thomas Pembrok. Given at Cradokeston. Witnesses: William le Gras, John le Gras, Edmund le Gras, Thomas Pembrok, Martin Byketon, and others. [Vol I, p.324]

November 1348 – Deed of entail made by Milo Cornewalshe, chaplain. He grants to Patrick son of Fulc de la Fregne, knight, and Johanna his wife one messuage and two carucates of land in Rathcradok in the tenement of Kildreynagh, which formerly belonged to Ralph de Uske, lying between the land formerly Thomas Fanyn’s and the land formerly Thomas de Druhull’s… Given at Rathcradok. Witnesses: Robert Shorthals, John de Blaunchevill, knights, Thomas Purcel, Gilbert Shorthals and Thomas Pembrok. [Vol I, p.342]

January 22, 1410 – Henry Fanyn of Moytobry appeared before the county court of the liberty of Tipperary, at Crumpiscastell, before Robert Poer, sheriff of the same liberty. [Vol. II, p.289]

August 2, 1430 – John Fanyn gives and grants to Thomas son of Nicholas de sancto Johanne and his heirs all messuages, lands, tenements, etc., and services of free tenants together with a third part of a water-mill which are situated in Haltonwrstoun and Balispedegh. To have and to hold to him and his heirs for ever. [Vol. III, p. 74]

August 4, 1489 – Notarial deed declaring that “in the year of our Lord 1489 by the computation of the churches of England and Ireland, in the seventh indiction of the 5th year of the pontificate of Innocent VIII, in the parish church of St. Mary of Callan in the diocese of Ossory on the fourth day of August, in the presence of me, public notary, … Thomas Fannyng, lord of Mohobbir, chief of his nation, exhibited certain letters patent of the most reverend lord and father in Christ John, archbishop of Cashel, of happy memory, signed with the seal and subscription of William Broun, notary, scribe of the court of the same archbishop, containing the process in a cause of matrimony and legitimacy between the said Thomas, plaintiff, and William Fannyng, defendant, and the sentence pronounced by the same archbishop in the said case. These he handed to be read to the aforesaid notary…

We have seen, computed, and understood the rights of a case of birth and legitimacy between Thomas Fannyng the plaintiff and William Fannyng the defendant tried before us in our diocese of Cashel, each of whom claimed to be the legitimate son of Nicholas Fannyng, once captain of his nation, which still remains open and undecided…. therefore we…, by this our final sentence delivered by the advice of men learned of law, do declare that the said William has failed to prove his case and that the said Thomas is the legitimate son of the said Nicholas Fannyng and born in wedlock publicly contracted before the church.” [Vol III, p.267]

April 22, 1565 – Oliver Faning and James Faning of Garrynegrye, county Tipperary, grant to Sir Thomas Butler, Earl of Ormond, the castle of Moylessan with all the messuages, lands, etc., in the town and field of the same. In February, 1570, this grant (deed) was declared void because the land mentioned was in mortgage for 19l. 6s. 8d…. which money was tendered and paid by an order taken at the sessions kept at Cahsel, Feb. 27, 1570. [Vol V, p.152]

December 20, 1579 – Edmund Fanning of Farrinrory, Co. Tipperary, gentleman, son and heir of William Fanning late of the same, grants to Thomas, Earl of Ormond, half of the towns of Ballymaclaghne and Ballytarsne in county Kilkenny or Carlow, with all the messuages, lands, etc., belonging to the same, to hold to him, his heirs and assigns for ever. [Vol V, p. 303]

January 27, 1584/5 – Bond, by Richard Butler of Powleston, Co. Kilkenny, gent., and Morerteghe O’Riane of Ballyclaghine in the same, gent., to the effect that they owe 300l. to Thomas, Earl of Ormond, on condition that William Fanyng, son and heir of James Fanyng, late of Balyclaghin, his heirs and assigns, and all other persons seised or to be seised to his and their use of the moiety of the towns and lands of Ballymclaghin and Ballytarsny, Co. Kilkenny, whereof William Fanyng, father of said James, was in his life-time seised, shall abide by the award of Gerald Blanchvild of Blanchvilston, Robert Forstall of Kilfiragh, etc., concerning the right, title, and interest of the moiety of said towns, now in controversy between said William Fanyng and the Earl of Ormond.

In March of the same year, an award was made to William Faninge fitz James of Ballymclaghne, where “the Earl shall make an estate in tail of the premises (above) to said William with remainder to Oliver Faninge, William’s uncle, with remainder to said Earl. [Vol VI, p.15]

December 13, 1592 – In a commission from the noblemen, gentlemen and freeholders of the county palatine or liberty of Tipperary appears the following names: William Fanning of Ballygary, and Edmund Fanning of Faren Rory. [Vol VI, p.52]