Mary Elizabeth Fanning was the eldest daughter of William Fanning and Catherine Hayes of Bulla Victoria Australia. She was born in 1845 and married Jeremiah Skehan and lived at Romsey in Victoria all her life. He worked as a farmer and they also owned and ran The Junction Hotel in Monegeetta where they lived. She died in 1900 and is buried in Lancefield Cemetery. 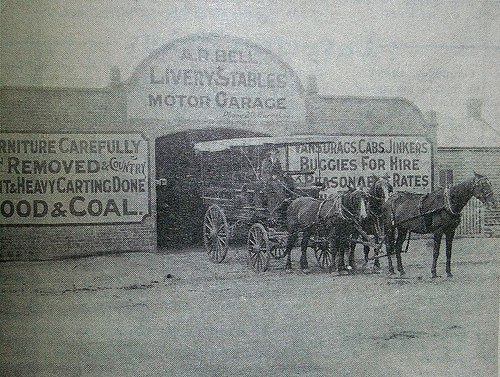 Mary Elizabeth Fanning was born at Werribee in Victoria in 1845. Her parents, William and Catherine Fanning, had come out from Thurles, Co. Tipperary Ireland in 1841. They lived and worked at Werribee for the first few years before moving to Bulla.

In 1862 Mary Fanning aged 18 was a witness at an inquest into the death of an infant girl in Emu Creek. Johanna Doyle who lived and worked on the Fanning property was suspected of the child’s death.

Mary Fanning’s Signature at the 1862 inquest.

Recently I contacted a DNA match who has Skehan ancestors from Dualla in Co Tipperary. How we are a match is a still a mystery.

I started looking for the birth of Jeremiah and discovered he was baptised on 18 Nov 1833 in Boherlahan Parish in South Tipperary. His parents’ address given as Kill Hill or Killhill. I also came across the Baptism record of his brother William Skehan, 10 Mar 1835, in the same location. So far I have not been able to find any more children of John and Mary Skehan nee O’Keeffe.

Skehan is sometimes spelled as Skeahan, Skehane and Skehin and no doubt there are other variations.

I decided to look for the marriage of John Skehan and Mary O’Keeffe. They were married in the Catholic Church on 18 Nov 1833 after a three month scandal!

“John Skeahan of Dualla and Mary Keeffe of Featherd having eloped, from great? scandal for three months and their first married in Church by the Rev W Bagnall Church of Magorban, then again married by the Rev William Kirwain in presence of John Keeffe, Thomas? Ryan and Alicia? Commons?”

They had been originally married in the Protestant Church of Magorban. I am assuming that Mary O’Keefe was a Protestant.

Jeremiah’s family came from Co Tipperary, as did the Fanning family. He came out to Australia when he was about 21 years old, around 1859. His father John, was also a farmer from Dualla Co Tipperary. His mother was Mary O’Keefe from Fethard in the same county. The Skehan family lived at Kill Hill Kilballyherberry in Co Tipperary. There is now a wind farm at Kill Hill.

In Australia Jeremiah and Mary lived at Monegeeta, in Romsey, Victoria, where they were the licensees of The Junction Hotel. The hotel was at Lancefield Junction, on the corner of Gisbourne and Lancefield Rds, at the Railway Station. It was next to Mintaro Homestead, the smaller replica of Melbourne’s Government House built in 1882.  Mary and Jeremiah also farmed as well as ran the pub.The hotel was on their land. Below is a map of the area from 1880-1890:

This land was originally owned by Mary’s father William Patrick Fanning (listed as W.Fannan) and gazetted in 1858:

Jeremiah died at Monegeeta in Sept of 1896, age 58, of a heart condition, and is buried in the Lancefield Cemetery.  Mary died at Romsey in 1923 at the age of seventy eight.

Jeremiah Skehan died intestate. His probate papers are online at the Public Records Office of Victoria, as are Mary Skehan’s.

Jeremiah’s son, also named Jeremiah, was a blacksmith. I think the photo below of Jerry Skehan is him although it could also be of his son Gerald Skehan who was also a blacksmith. The young boy is Bruce Laing. If anyone knows which Skehan this is please let me know. I don’t know when it was taken.

The following pages about the Skehan family are taken from: 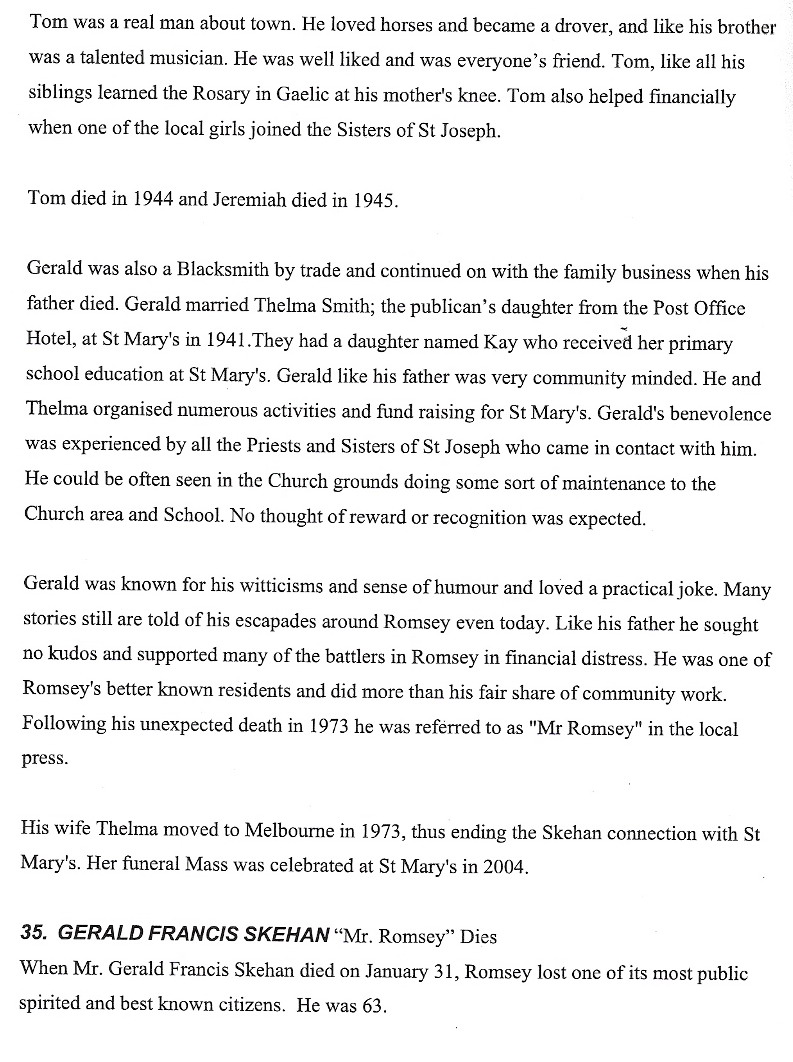 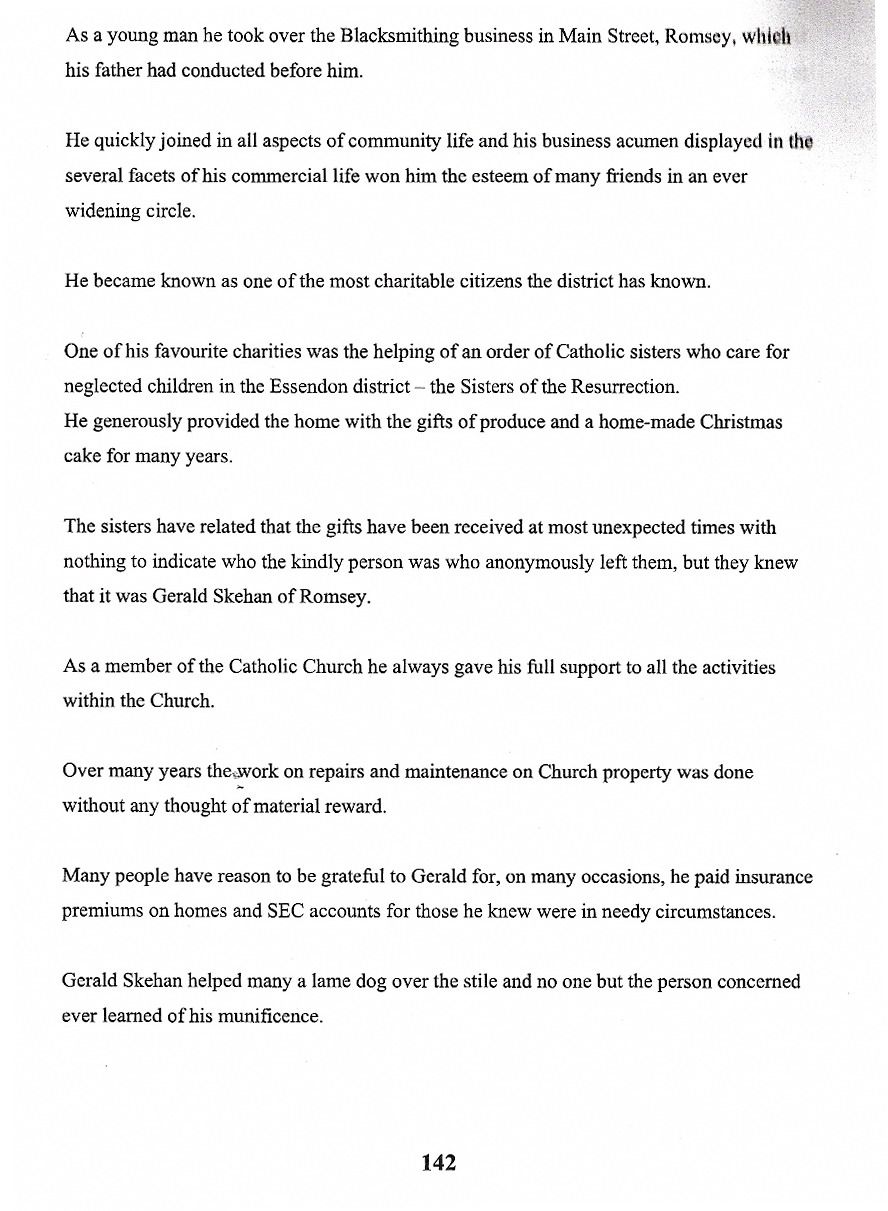 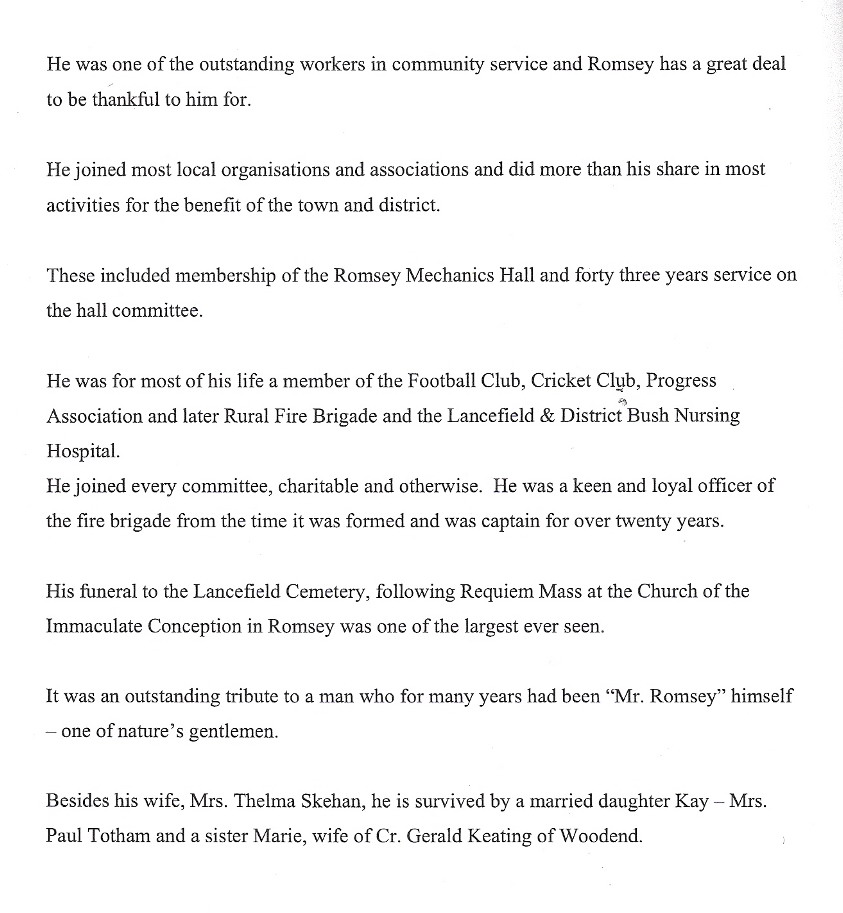