In Slater’s Directory 1846 Thurles town in Co Tipperary Ireland is described in detail. 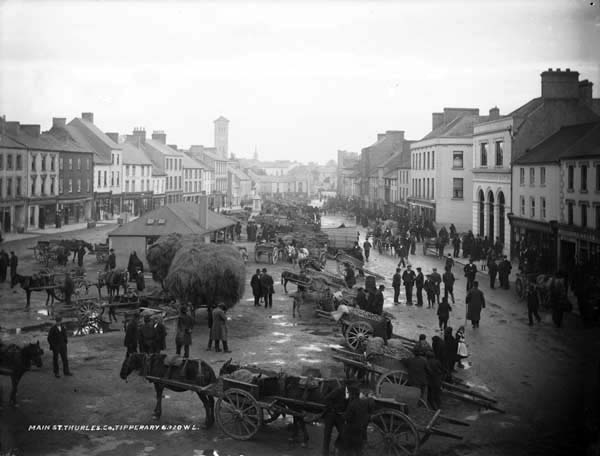 Slater’s Commerical Directory of Ireland 1846 goes through the towns of Ireland alphabetically. It gives a detailed description of the town or city, with post office information and shows the names of nobility and gentry living in or close to the town. The traders of each town are arranged according to their trade.

In 1846 Thurles is described in Slater’s as: “an ancient and respectable market town, in the parish of its name, barony of Eliogarty, county of Tipperary, about 90 miles S.W. from Dublin, 46 E. from Limerick, 29 W from Kilkenny, and the like distance N from Clonmel; pleasantly situated on the Suir, along each bank of which the town extends for about a mile. The main street, which is of considerable length, crosses the river, at right angles, from east to west; there are also other streets branching from this, with large and populous suburbs. The knights templars are said to have founded a preceptory here, and possessed themselves of a castle, the latter erected in the early part of the thirteenth century. A castle was subsequently built by James Butler, the first lord palatine of Tipperary, one of whose descendants, in 1535, was created Viscount Thurles: the town now confers the inferior title of Viscount on the Marquess of Ormonde.

The old and stately sessions-house stands in the centre of the town, and in an adjoining street has been erected, at the cost of several thousand pounds, a spacious gaol or bridewell, as also a new sessions-house, with commodious accomodation, having a very chaste cut stone front. The town has received many judicious improvements lately, by the agent for Viscount Chabot, the proprietor of the town : new streets have been laid out, and gravelled walks formed- the latter leading to Turtulla, the beautiful residence of Nicholas Maher, Esq. M.P. for the county, form a pleasing promenade.

An extensive retail trade and much country business are transacted, and, as the town is surrounded by a rich, fertile, and populous country, the necessaries of life are abundant. Turf bogs in detached situations, and extensive collieries six miles distant, furnish a good supply of fuel. There are, in operation, in the town branch establishments of the ‘National Bank of Ireland,’ and the ‘Tipperary Banking Company.’ The principal inn is Boyton’s Hotel, a most excellently conducted house.

The parish church, situated at the east end of the town, is a small but neat building. The Roman Catholic chapel is the cathedral of the diocese and cost 10,000 pounds. It is one of the finest ecclesiastical buildings in Ireland, and has a noble organ, built by Flight and Robson, of London : the Roman Catholic Archbishop resides in the town. There are two convents, situated near the chapel, in each of which a great number of poor female children are taught needlework and other useful branches of industry, as also reading and writing. In the Ursaline Convent a large number of young ladies from Dublin, Cork, and other parts of Ireland, are received as boarders, and instructed in every polite accomplishment by the nuns of the order, who are eminently qualified for such an undertaking. The house is delightfully situated on the banks of the river Suir, and the gardens are beautifully and tastefully laid out. In this establishment there are twenty nuns, who have a private entrance to a commodious gallery in the chapel, to attend divine service. The Presentation order have an elegant residence, with tastefully laid out gardens, from which they have a communication with the chapel; the present community consists of a superioress and seven nuns. There is also an establishment of monks, who devote their time to the instruction of four hundred boys, on the Lancasterian system, supported in part by public subscription, and funds left for that purpose by the late Most Rev. Dr. Bray, Archbishop of Cashel. The new Catholic College is a sumptuous building, with a centre and wings, the interior being arranged with perfect adaptation to the convenience of the students. The first stone was laid by Dr. Laffan, July 6th, 1829. It forms two distinct establishments, one for ecclesiastical, the other for lay students.

The beautiful and interesting ruins of the famous abbey of Holy Cross are distant from Thurles three miles, on the road to Cashel. The account of the origin of this monument of antiquity is, that Murtough, monarch of Ireland, and grandson of Brien Boru, having received from Pope Pascal II, in 1110, a gift of a piece of the cross, covered with gold and ornamented with precious stones, determined to found a monastery, and dedicate it to the Holy Cross, which he began, but did not live to finish. Donald O’Brien completed the Church and abbey in 1169; he was king of North Munster, and his monument is still to be seen.

Market days Tuesday and Saturday. Fairs on the first Tuesday in every month, Easter Monday, August 21st, and December 21st, when there is a good supply of stock, and latterly a tolerable number of horses. The population of Thurles parish, in 1841, was 10,284, inclusive of 7,523 inhabitants of the town.