Fannings and Darmodys of Co Tipperary Ireland who paid tithes between 1815 and 1837 and those who in 1831 defaulted on the payment of tithes. 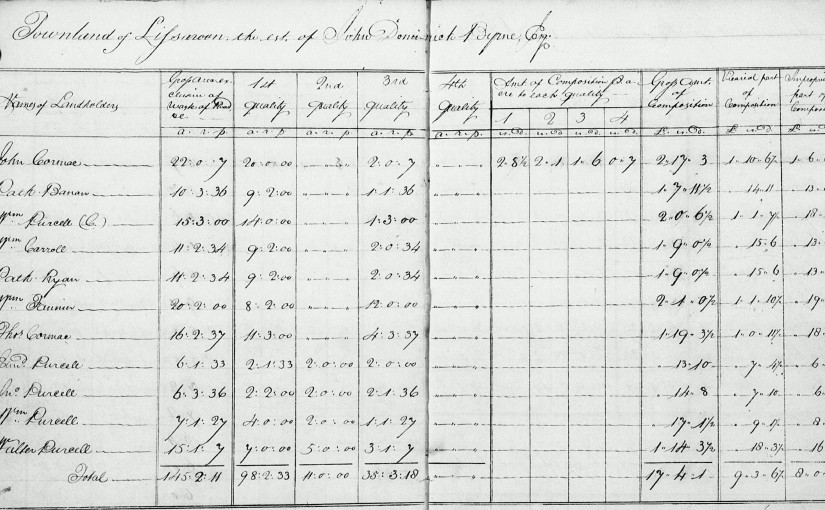 Tithes (meaning a tenth) were levies collected in support of a church, which could be a single church or all churches of one faith. In Ireland from the 1500s to the 1800s, tithes were taxes on the agricultural system to support the Church of Ireland. Tithes made everyone cross, for many reasons. Those who were Catholic or Presbyterian resented the contribution to the established church. Land proprietors resented the impact of tithes on rents.

Tithes existed in Ireland as long ago as the 1100s, giving support to monasteries. The system that came to be resented so much was formalized in law in 1541. In 1736 legislation exempted pasture from the calculation so the burden fell upon farmers who cultivated the soil. Not all tithes went to the Church of Ireland; in 1832 a little over 15% went to “lay” (non-religious) tithe owners who acquired the right to collect tithes at the dissolution of the monasteries.

By the early 1800s resentment had become very serious. Tithes had been part of the cause of rural unrest in the late 1700s; in the 1830s, the disruptions came to be called the Tithe War. The campaign against tithes began in County Kilkenny and spread quickly to other counties. By 1833, more than half the tithes due in 22 counties had not been paid. Many landowners supported non-payment because legislation of 1823 restored pastureland to the calculation. The resistance became violent, and some deaths occurred among protestors and police.

Faced with an impossible situation, the authorities stopped trying to enforce payment and clergymen without income could apply for relief. In 1838 the tithe ceased to be paid by occupiers and landlords were levied a “rent charge.” The problem completely disappeared at the disestablishment of the Church of Ireland (1869).

The Tithe Composition Act, passed in 1823, set out the process by which the tithe was converted to a monetary payment due twice a year. Property value was assessed, meetings were held in parishes, and records made of all those who were to make the payments. These are the Tithe Applotment Books.

At the time of the Tithe War any clergyman applying for relief was required to report on the situation in his parish including the names of all those who had failed to pay–the tithe defaulters. Lists of roughly 30,000 defaulters survive. ” From Ancestry.com article by Sherry Irvine

Civil Parish of Inch  William Fannin, my ancestor who is buried in Ballycahill Cemetery.

These  records came from The IrelandGenWeb Project and ancestry.com.