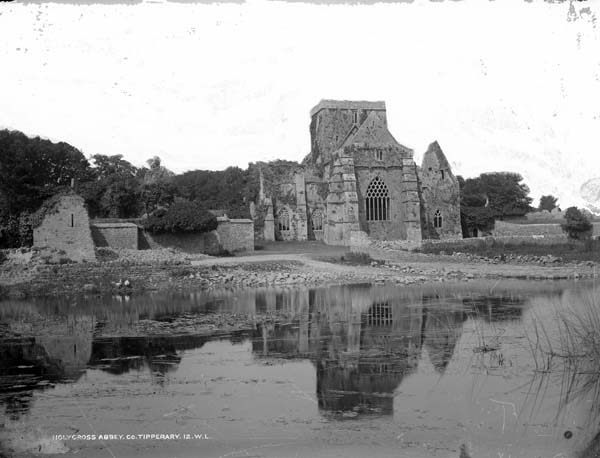 It is pleasantly situated on the river Suir, and extends on each bank, to the distance of an English mile. The main street is one hundred and ten English perches in length, crosses the river at right angles, from east to west, and forms a large open and regular street, 170 feet wide at the west end, and regularly decreasing to 85 feet at the bridge; on the other side of the river it is 72 feet wide, from the bridge to its eastern extremity; there are also other streets branching from the main street with large and populous suburbs.

An extensive retail trade and much country business are transacted, as the town is surrounded by rich, fertile and populous country. The necessities of life are abundant. Turf bogs in detached situations, and extensive collieries, six miles distant, afford a good supply of fuel.

The ruins of seven castles were to be seen within the last twenty years; there are at present the remains of three, with those of a large mansion , lately the residence of the Landaff family. In 1300 a monastery for Carmalites or White Friars, the tower which still exists, was founded here by the family of Butler.

This town gave the title of Earl to the noble family of Ormond. The public buildings are numerous and respectable. A large and stately sessions house stands in the centre of the town, and in an adjoining street has lately been erected, at the cost of several thousand pounds, a spacious gaol, or bridewell. The church is a small but neat building, with a well inclosed yard, and the chapel, which cost 10,000l. is one of the largest and most handsome structures of the kind in Ireland; the interior is magnificent, and about to receive the valuable addition of an organ.

There are two convents, situated near the chapel. In each of which a great number of poor female children are taught needlework and other useful branches of industry, as also reading and writing.

There is also an establishment of monks, who devote their time to the instructions of four hundred boys, on the Lancastrian system, and the number is daily increasing; this most benevolent institution is solely supported by public subscription.

In the Ursaline Convent a large number of young ladies from Dublin, Cork, and other parts of Ireland, are received as boarders, and instructed on every polite accomplishment. The house is most delightfully situated on the banks of the river Suir, and the gardens are beautifully and tastefully laid out, and enclosed by a wall of moderate height. In this establishment there are twenty nuns, who have a private entrance to a commodious gallery in the chapel, to attend divine service.

The Presentation order are about to erect a superior and commodious place of residence; the present establishment consists of a superioress and seven nuns.

Thurles is rapidly increasing in wealth and importance, and a unanimity and good will exist between all classes of society rarely to be met with. Sessions are held here twice a year, besides weekly petty sessions, at which the resident and neighbouring magistrates preside.

The ruins of the famous abbey of Holy Cross are distant from Thurles three miles on the road to Cashel; they are of the most beautiful and interesting description.The account we have of the origin of this monument of antiquity, is, that Murtough, monarch of Ireland, and grandson of Brien Boru, having received from Pope Pascal II, in 1110, a gift of a piece of the Cross, covered with gold and ornamented with precious stones, determined to found a monastery, and dedicated it to the Holy Cross, which he began but did not live to finish. Donald O’Brien completed the church and abbey in 1169; he was king of North Munster, and his monument is still to be seen.

The market is held on Saturday, and there are fairs on the first Tuesday in very month, on Easter Monday, the 21st of August, and the 21st of December.”