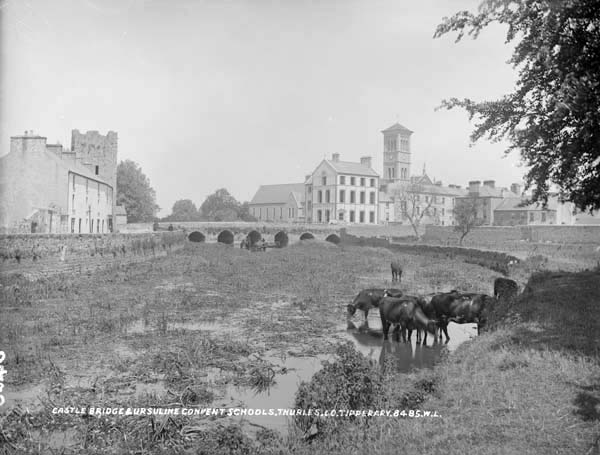 This description is from the “Topographical Dictionary of Ireland” by Samuel Lewis 1837.

“Thurles is a market and post-town in the province of Munster, 24 3/4 miles north from Clonmel and 75 miles south west from Dublin, on the road from Tipperary to Templemore; containing 10,031 inhabitants, 7,084 of which live in the town of Thurles. This place originally called Durlas–O’Fogarty, (Durlas is Gaelic for fort) is of great antiquity and in the 10th century was the scene of a memorable battle between the Danes and the native Irish.

The town is pleasantly situated on the banks of the river Suir, by which it is divided into two nearly equal parts, connected by a low bridge and consists of one spacious street, from each extremity of which smaller streets diverge in various directions. In 1831 it contains 1210 houses.

The surrounding country is extremely fertile and the town is the commercial centre of a populous and highly cultivated district, and is rapidly increasing in wealth and importance. A considerable trade is carried on in corn, which is sent by land carriage to Clonmel: it has also excellent retail trade, and contains a large brewery and a tannery.

The parish comprises 7290 statute acres, of which 5670 are arable, 810 pasture, and 810 bog and waste: the land in cultivation is of very good quality, producing abundant crops,. An abundant supply of fuel is obtained from the bogs and from Slievaedagh coal mines, which are about eight miles distant.”