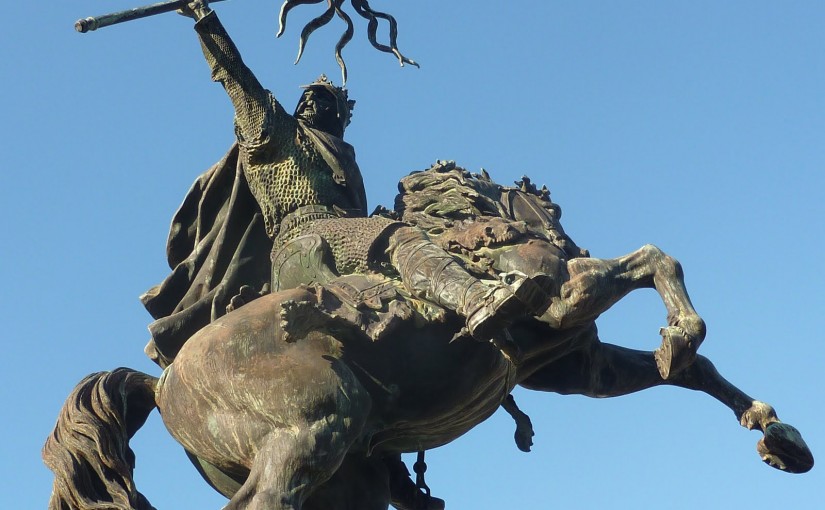 William the Conqueror's Statue in France 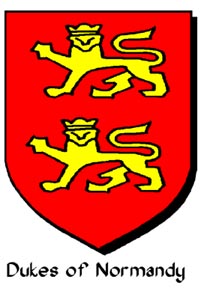 Fanning is an Anglo-Irish or Anglo-Norman surname. It seems that The Irish Fannings were originally Norman knights. They have been referred to as minor Norman knights.

However there are no names similar to Fanning on The Battle Abbey Rolls which can be seen at www.robertsewell.ca/battleabbey.html . This document recorded the Companions of Duke William of Normandy at the Battle of Hastings. They are a combination of all the known Battle Abbey Rolls, including Wace, Dukes, Counts, Barons, Seigneurs who attended William at Hastings. These were the commanders. They were the elite who had provided ships, horses, men and supplies for the venture. They were granted the Lordships.

The list does not include the estimated 12,000, Standard bearers, Men at Arms, Yeomen, Freemen and other ranks, although some of these were granted smaller parcels of England, some even as small as 1/8 th of a knight’s fee.

The Domesday Book was compiled in 1086 and records all land and landholders in England. William needed to know how much wealth he had to fight off the Danes.

The majority of landholders in England at the time of the Domesday Book had accompanied William the Conqueror from France in 1066, and were granted areas of land previously held by English natives. The alphabetized list on the following pages contains brief notes on almost 200 of the most well-known landholders at the time. A complete list can never be drawn up due to fact that many of those mentioned in the Domesday book have vanished into obscurity. While there are no Fannings on it, that I can see, it is still a fascinating document.

The following are references to Fannings in Ireland from 1192:

In 1171 the Anglo-Norman leader Strongbow (Richard de Clare) was created Lord of Leinster by the King of England and initiated land grants to his favourites in exchange for military service as knights. These grants of land were expressed in terms of knights’ fees, with payment due from each tenant-in-chief to their lord, who was accountable to the King of England. His successor in 1192 William Marshall continued this process of land grants. Most of Central Ossory was shared among William’s knights. Galmoy was split among the bishop of Ossory, and the families of Bigod, Drohull, Fanyn, Syward, Archdeacon, and Smith.

The political and social impacts to the native Gaelic septs in Ossory included a gradual replacement of the Irish Brehon tradition of local chiefs, laws and territories with the political structure of the Anglo-Normans which centered itself around the establishment of shires, manors, castles, villages and churches.

Richard Fanyn(Janyn) was among the first of the family in Ireland. He witnessed Geoffrey FitzRobert’s charter in 1204. He was killed fighting on the side of Richard, Earl Marshall in 1234. He may have been the original enfeoffee at Clomantagh in Kilkenny. He was succeeded by his son Thomas who held half the fee of a knight at Glothementhau. In 1300 John Fanyn was lord of Clomantagh. A Henry Fanyn is mentioned probably son of John. In 1317 Thomas de Fanyn (Fannyn) had succeeded to the half knight’s fee at Clohmantagh. He was dead by 1348.

Extracts from the Calendar of Ormond Deeds.I-VI, Edmund Curtis,1932-43:

1565 Oliver Faning and James Faning of Garrynegrye, County Tipperary, grant to Sir Thomas Butler, Earl of Ormond, the castle of Moylessan . Later voided as it was in mortgage.

1579 Edmund Fanning of Farinrory, Co Tipperary, son of William Fanning grants to Thomas ,Earl of Ormond half the towns of Ballymaclaghne and Ballytarsne in Co Kilkenny or Carlow.

1592 William Fanning of Ballygary and Edmund Fanning of Faren Rory are mentioned in a commission.

The above notes were taken from an article in Rootsweb by Dennis Walsh.  The Fanning Family Early Documented History

The Cromwellian Protestant Settlement (1650-1690) The arrival of Oliver Cromwell’s army in Kilkenny by 1650, dealt a devastating blow to the Old English (Anglo-Norman Catholic) landed gentry. Following defeat, many families remained on as the tenantry of the county, while others transplanted themselves into Connacht. Of the families which are said to have moved in the 1650’s is that of Giles Fannyng.

Just prior to 1641, the majority of landed proprietors in County Kilkenny were Catholics of Anglo-Norman descent. By the end of the seventeenth century this class had largely been replaced by New English Protestant landlords, many of whom were Cromwellian officers, soldiers and supporters whose pay had been satisfied by land grants. Still a large part of Kilkenny was controlled by the Duke of Ormond and other Butler lands.

The Williamite Ascendancy (1691-1703) By the late 1600’s, the Williamite victory in Ireland was followed by the confiscation of most ‘Jacobite’ estates.

This new landed gentry bore little resemblance to the Ireland envisioned by the Cromwellian land commissioners. The old Catholic order had been destroyed but it had been replaced, not with Protestant yeomanry, but by a handful of powerful Protestant landowners, many of whom were non-residents. Kilkenny’s tenantry remained Catholic, largely Old Irish, as it had been before 1641, but it was augmented by many former Old English proprietors. The Cromwellian commissioners had not intended to lay the basis of a narrow gentry class, but the failure of the majority of Kilkenny’s grantees to take possession or take up residence upon their lands, allowed a small number of enterprising men to gain possession of vast amounts of land. From New English Families in Rootsweb by Dennis Walsh.

1. “The names of all the gentlemen inhabiting the comit’ of Kilkenny, with their lands valued by estimation as followeth.”

Source: Calendar of the Carew Manuscripts